So we have got used to genocidal wars, wars of terror, privatisation and being cosy with big business - the sign of the once people's champion party, the party of the unions, of organised labour, of grass-rrots issues like health and housing and now it comes to this. The Neo-Labour minister Kim Howells has his photo taken in Colombia with a group of troops linked to the murder of trade union and human rights activists;

Surrounding the smiling face of the Foreign Office minister Kim Howells in a picture taken in the Colombian region of Sumapaz are a general linked to paramilitary death squads and soldiers of a notorious unit of the Colombian army accused, including by Amnesty International, of torturing and killing trade unionists. 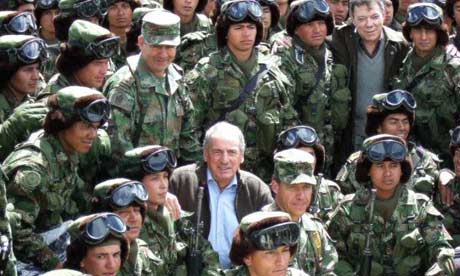 That's Kim in the middle with his hand resting cosily on the shoulder of one of the soldiers from the High Mountain Battalion. Just behind him to the left is General Mario Montoya, a man linked to the terrorist bombing of a newspaper and who was in charge of a special police unit operation when 40 people were 'disappeared'.
-
Posted by anarchist at 10:02 am
Labels: neo-labour, war on terror