I've been a bit busy of late and so not been able to blog as much as I'd like here. However this news was just too fun to miss! The background to the story is that a group of independent climate sceptics embarked on a project called 'Berkeley Earth' to re-analyse all of the temperature data so provide conclusive proof either way of global warming. The project lead, a physicist Dr. Muller, has in the past made sceptical noises about climate change and the temperature data so naturally the deniers liked him and were supportive of his work. Here's what popular deniliart climate blogger Anthony Watts had to say:

And, I’m prepared to accept whatever result they produce, even if it proves my premise wrong. I’m taking this bold step because the method has promise. So let’s not pay attention to the little yippers who want to tear it down before they even see the results. I haven’t seen the global result, nobody has, not even the home team, but the method isn’t the madness that we’ve seen from NOAA, NCDC, GISS, and CRU, and, there aren’t any monetary strings attached to the result that I can tell. If the project was terminated tomorrow, nobody loses jobs, no large government programs get shut down, and no dependent programs crash either.

He even provided them with data from his own non-peer reviewed analysis of surface temperature. Other deniers offer support too. The denier funding oil-magnate, Koch, threw them cash for the project (but so did climate realists funding groups too). Then the denier politicians invited Dr. Muller to testify before congress. It was all looking sweeeeeeeet. Problem was, this is what Muller said at the hearings:

"The Berkeley Earth agreement with the prior analysis surprised us, since our preliminary results don't yet address many of the known biases. When they do, it is possible that the corrections could bring our agreement into disagreement."

Yes, the results they prodiced agreed with the results climate sciencets prodiced. There earth is warming. Here's what it looks like: 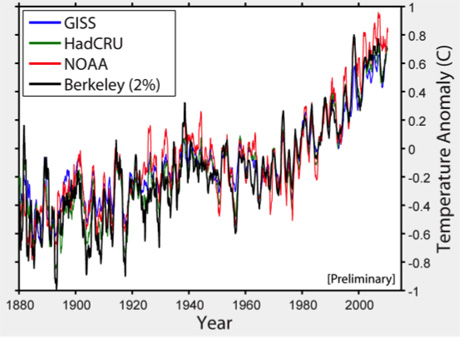 Ooops for denialists! So how did Watts respond to the confirmation of climate change? Did he accept whatever result they produced, even if it proved his premise wrong? Did he fuck!

With his testimony, Dr. Muller has totally destroyed any credibility he might have had with me.

What Muller actually said about Watts is very diferent to the spin you try to force feed us!

"Q: Did photos on [skeptic] Anthony Watts' Web site showing official temperature gauges in flawed locations like parking lots inspire you to get involved in the debate over the accuracy of the weather stations ?

R.M.: I realized that Watts was doing something that was of importance. The issues he raised needed to be addressed. It made me seriously wonder whether the reported global warming may be biased by poor station quality. Watts is a hero for what he's done. So is [prominent skeptic blogger] Steve McIntyre

Now that does not sit well with what you say.

Yep - the true details are here:-

"The project has sought to use new techniques to analyze temperature data to see whether problems like the bad stations could bias the results.

Muller says he admires the work of prominent skeptic blogger Andrew Watts, a bête noire for most climate scientists, who has published photographs that document problems with hundreds of official U.S. government temperature stations. (Whether those problems affect reported climate trends is controversial.)

Muller spoke twice with ScienceInsider after testifying on 31 March before the science committee. Here are excerpts from those conversations.

So, according to our heroic anonymous commenter:

(1) Muller concluded that temperature records were not biased by the urban heat island effect.

(2) Watts insists that temperature records were biased by the urban heat island effect.

(3) When Muller presented his conclusion, it drove Watts absolutely bonkers.

(4) Therefore, both Muller and Watts are absolutely correct!!!!! Repeat that in big bold capital letters and more exclamation marks or something.

Any goon with half a brain can easily spot the contradiction in our heroic commenter's 'argument'.

Good article. I learn a very important factor very complicated upon contrasting weblogs everyday. It would be stimulating to understand subject materials from distinct writers and also exercise just a little one issue through. I'd usually employ some with all the information on my own weblog no matter whether you don't mind. Natually i'll offer you a link in your web web site. Thank you for sharing. TN Clinton Payday Loans

anarchist606.blogspot.com next page 'Disposable income" may be the wages left after payment of all taxes, and national insurances

anarchist606.blogspot.com total stranger Packaged food costs a whole lot, and yes it is not the most effective for you

anarchist606.blogspot.com click here! There are financial mediators who bring for your requirements the personalized deals the creditor company can offer at the cost

Hi! I simply wish to give you a big thumbs up for the excellent information you've got here on this post. I'll be coming back to your website for more soon.

You are so cool! I don't believe I've truly read a single thing like this before. So good to find another person with unique thoughts on this subject matter. Really.. many thanks for starting this up. This web site is one thing that is needed on the web, someone with a bit of originality!