The Cost of Taking Iraq
We all know that this war is costing a lot of our cash, but have you stopped to think about what it all really means? On 1st April ITN stated that the 23 Storm Shadow missiles so far fired on Baghdad by the RAF costs £600,000. Per missile. No joke. For that you could fund the five year Bristol based research program to screen for compounds which can be developed into drugs for the treatment of Alzheimer's disease (£450,000) and fund the University of Bristol three year project into hearing loss (£150,000) and have £50,000 change to spend on local community projects. You plan what you could do with 23 x £600,000. But the pro-war camp would then argue that 'what price can you put on freedom?'

But lets assume they are right and follow their method that this is a war of liberation and a war to save lives in the future. You see, Blair fears that; "....we wake up one day and we find either that one of these dictatorial states has used weapons of mass destruction ... or alternatively these weapons ... fall into the hands of these terror groups." Ok. So how many people can we expect to save by supporting this war? Obviously it's impossible to say. But say, worst case scenario is in one year; another ten September 11ths (40,000 people), a couple of nukes going off and killing say three times the death toll of Hiroshima and Nagasaki combined (600,000) and say 4 or 5 anthrax attacks (615,000). 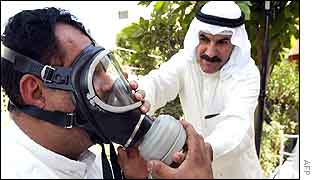 Sound a bad enough case scenario? Thats a total of 1,255,000 people killed. Lets round it up to 1.5 million by adding another 245,000 lives (or another 49 Halabja chemical gas atrocities). The axis of Bush is taking us to war to save a possible one and a half million deaths. Wow. That must be well worth the $150 Billion for the war.

But if I put my capitalist head on for a minute or two: Is that value-for-money at a cost of $100,000 per life saved? If I were to subcontract the life saving of 1.5 million people out to another group who chose to invest it in providing clean drinking water worldwide rather than invading Iraq, they could save 1.5 million lives for only $7.5 billion. Thats a cost of $5000 per life saved. This is a facetious way of saying that for the same price as the war in Iraq, you could give clean drinking water to every single person on the planet for 6 years and thereby save 30 million lives. A far more cost-effective life saving method, plus it would create quite a few jobs. To see the amount of money being spent to 'free' Iraq and still think it is all about terror or WMDs or freedom then you have to believe that our leaders are not at all capitalists but instead are so committed to democracy there is no financial price they are not willing to pay to install it. Before your believe that you have to accept that Bush believes in democracy so much he fought tooth and nail for a re-vote in Florida and Blair is a socialist fighting to put lives over profit. Does not compute.

No, when you look at the figures, you cannot but come to the conclusion that there is a greater financial prize at stake here; Given that (at current market value) the oil of Iraq is worth $3125 billion, doesn't it make much more sense that here is where the $150 Billion for the war is really being invested. Plus it has the added bonuses that once the US privatizes the Iraq oil industry, the multi-nationals who will make this money will have the investment secured at the expense of the tax payer. Who says that crime does not pay?
Posted by anarchist at 10:53 pm