Well they are saying the war is all but over. Maybe it is, maybe it isn’t. I hope it is and the bombing can end. But once the war ends those of us who opposed it will be subject to the 'yah-boo you were wrong' type attacks from the pro-war lobby. Get ready for the 'you were wrong about Afghanistan and you were wrong about Iraq' media assaults.

Some suggested that Iraq might become a Vietnam. It might yet still. After initial large scale combat, were the North Vietnamese Army was soundly beaten in conventional war by the massive US firepower, most of the Vietnam war descended into drip-drip guerrilla warfare. The US could boast they controlled the cities, but the jungles were closed. In an attempt to open them up chemical weapons such as the defoliant 'Agent Orange' were employed. While in the cities the constant guerrilla attacks were met with increased ferocity by US forces towards the civilians. Which in turn recruited more guerrillas. Drip. Drip.

That was then and this is now. There were other questions we had that have not been answered; what about depleted uranium? What about the future of Iraq? What about the anger in the Muslim world? The damage to international institutions? On some things we were wrong about; there were less civilian casualties than in Afghanistan (so far) and the oil fields were not set ablaze. But was it our fears for these that led the US/UK forces to ensure we were wrong on this issue?

Were we wrong about Afghanistan? Not yet. It has not stopped terrorism, the victims of the Bali bombing can attest to that. It has not stopped the heroin trade as Blair said it would, in reality it lead to a opium production explosion. Has it stopped the Taliban? No, they are still going and the new government has re-opened the Ministry of Vice and Virtue. US forces are virtually contained to barracks unless fully-tooled up and attacks on them continue even to this day.

Drip.
And in the US Military base at Bagram airport two 'suspect terrorist' die under interrogation. Beaten to death by the forces of democracy.

Drip.
And in Colombia, another US oil war - this time invisible to the west - plays out it's deadly path.

Drip.
And still alive today are the victims of ‘Agent Orange’. There will be no CNN/NBC/Fox news special on their plight. 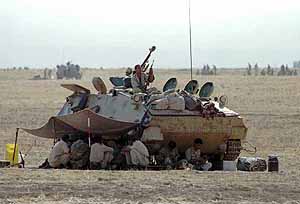 Posted by anarchist at 1:10 pm