The Drug Wars in Mexico

A shocking and very interesting read is 'Day of the Dead' about the drug-wars in Mexico;

The cartels, meanwhile, 'have replaced the old pyramidical chain of command with the same concession or franchising system as any other commodity,' he says. 'Drug trafficking has become more democratic in the modern, capitalist sense, outsourced and opportunistic.' It takes a moment to realise how disdainfully funny Alvarado is being about the 'legal' economy, as well as the killers: 'The cartels don't need to control the streets, because they cannot, so they franchise them, get other people to kill and die, and collect the taxes and commissions. All they need to control is the corridors across the border, because Juárez is the one place from which you can reach any part of the United States.' This 'outsourcing' has been a speciality of the Sinaloa cartel: to franchise use of its corrupted officials and even tunnels under the border equipped with ventilation, lights and rails, in return for 'taxes' and commissions from sub-contracted traffickers. 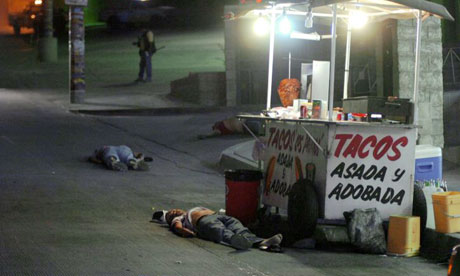 It mentions the 'House of the Dead' scandal, which has been excellently covered by NacroNews;

The House of Death murders took place more than four years ago, before Mexican President Felipe Calderon escalated the drug war by ordering the military into Juarez, before the U.S. government authorized millions of dollars to further arm the hunters via Plan Mexico and before the narco-traffickers lost control of the killing fields.

But even four years ago, as a U.S. government informant assisted narco-traffickers and Mexican cops in carrying out the torture and vicious murders of a dozen people, the signs of the break down of civil society — on both sides of the border — were all there in front of us.

The informant, Guillermo Ramirez Peyro, was employed by U.S. Immigration and Customs Enforcement (ICE) — and was paid more than $200,000 for his work via U.S. taxpayers. The narco-trafficker who ordered the murders, Heriberto Santillan Tabares, employed a goon squad composed of Mexican cops led by a Mexican state police commander named Miguel Loya.