The Email Hack - No It Does Not Mean Case Closed

There are so many falicies over this climate change email hack, it is untrue. Denialists have been saying that this proves the science is not settled and how dare those that accepted the evidence tell them it is settled....at the same time as declaring that the issue is now settled because they say it is.

Then you have the classic double-standard of bleating on about 'hidden evidence' when it appears to suit them while being totally silent on hidden evidence that shows they are wrong. For example;
- White House Declassifies 1000 Global Warming Evidence Photos Bush Hid
- Bush Administration covered up global warming finding, then deliberately kept from Democrats

The denialists are also committing the creationism logical fallacy that ‘if I can prove you wrong, then by default I am right’ whereby creationists go for evolution on the basis that if they disprove it, then their pet theory must be right – but even if you could prove it is wrong – what is to say that God created the world? Why not Zeus? So even if you could prove that the mainstream AGW theory is incorrect (which a few emails out of context do not) you’ll still have to explain all the real-world effects we are seeing all around us (record floods, again, anyone? Changes in disease patterns, the drowning of Balgladesh, melting glaciers, the changes in weather patterns that led to Darfur crisis and so on). 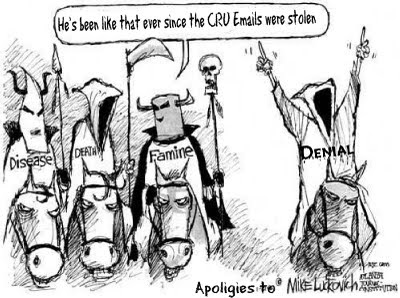 Here's a few good source on the issue... You can read it from the scientists themselves...or...

Anthony Leiserowitz, the director of the Yale Project on Climate Change, said the release of the e-mails will be remembered mostly as as embarrassment to the researchers.

"It shows that the process of science is not always pristine," said Leiserowitz. "But there's no smoking gun in the e-mails from what I've seen."

Leiserowitz, who is a social scientist, said the e-mails would provide fodder for the 2 to 3 percent of the general public that are hard-core climate change doubters. "For that small group it is like meat to the wolves."

At U.N. climate talks set for next month in Copenhagen, the top producers of greenhouse gases are expected to reach political agreements on tackling climate change, but not agree on hard targets for taking action.

The e-mails may serve as good gossip in the halls at the meeting, but will not play a big role otherwise, experts said.

The denialosphere has trumpeted the contents as proof of the fraudulent behavior of climate scientists, especially Phil Jones at CRU. But what’s most remarkable is that even the bits pointed to as a “smoking gun” really don’t support that idea. There are certainly phrases which seem incriminating when taken out of context — but when put into context are nothing of the kind.

Continuing to suggest that climate scientists generally, and Phil Jones specifically, are engaged in a conspiracy to deceive the world about global warming, when there turns out to be no real evidence of it in 10 years of personal communications (only words that can be twisted when taken out of context), demonstrates the idiocy of those who stand by that suggestion. If anything, the messages prove that there is not any conspiracy, and the scientists at CRU did not fudge data or engage in deceptive practices to push their “agenda.”

Climate sceptics have lied, obscured and cheated for years. That's why we climate rationalists must uphold the highest standards of science

I have seldom felt so alone. Confronted with crisis, most of the environmentalists I know have gone into denial. The emails hacked from the Climatic Research Unit (CRU) at the University of East Anglia, they say, are a storm in a tea cup, no big deal, exaggerated out of all recognition. It is true that climate change deniers have made wild claims which the material can't possibly support (the end of global warming, the death of climate science). But it is also true that the emails are very damaging.

The response of the greens and most of the scientists I know is profoundly ironic, as we spend so much of our time confronting other people's denial. Pretending that this isn't a real crisis isn't going to make it go away. Nor is an attempt to justify the emails with technicalities. We'll be able to get past this only by grasping reality, apologising where appropriate and demonstrating that it cannot happen again.

I had seen the Monbiot article. Any context, or just a repost?