Climate Change: What if We're Wrong?

What if the IPCC is wrong on climate change? It could happen - they know it, hence they put a 90% accuracy prediction on their work. This also means that denialists assume that the 10% wrong means no or very little climate change. Which could happen; very, very unlikley given the research we have now, but a possibility.

However there is also the (much more likely) possibility that if IPCC predictions are wrong the other way - where it is a shit-load worse that we thought. This is a very real possibility. See here and here. This scary diagram shows you where the debate is currently being held - and there are two areas that are outside the mainstream debate (except the Express, Telegraph, Mail and a few other papers that like to give space to the tin-foil hat brigade); the cranks on one side but yet on the other side; the worse-than-we-thought side; there are serious thinkers with the knowledge that means this is more than an armchair pundit. That's scary... 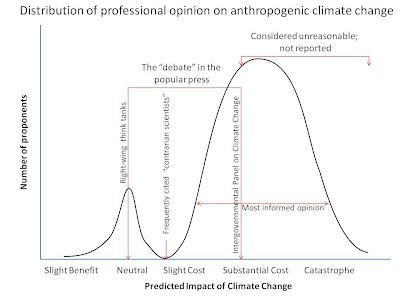 Interesting to quote Dick Cheney from 2001:

"If there's a 1% chance that Pakistani scientists are helping Al Qaeda build or develop a nuclear weapon, we have to treat it as a certainty in terms of our response..."

The 20% are only a possibilities for the coming of climate change,80% are sure,but when you asking for 100% it's so much for a climate change it's a globalwarming

after the cold war the UN needed something to terrorize us with, so they came up with this. they've been playing with the figures..

theres 100's of scientists have said its a scam..

theres more than a bit of warming coming.. the plant always heats then cools to do with sunspot activity...

check out D.U.M.B s.. and why are they building so many, with tax payers money..

James Delingpole - who you cite is a massive dick-head who does not know shit about science. He's been pushing the non-science educated Monkton as an 'expert' in science when is calculations are rubbish. Which beggs the question; if there are so many scientists who dispute it - why does denialism rely on a classics scholar like Monkton?